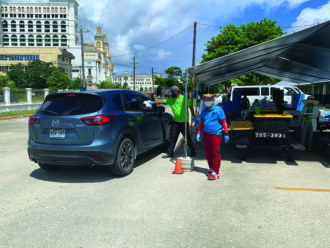 The agriculture community in Hawaii and the Pacific Islands is feeling the same impacts from COVID-19 as the mainland. But in addition, the islands face the added challenges of remoteness and having tourism-dependent economies.

The loss of tourism is a huge impact for all of the food system. Restaurants rely on tourists and the local ag markets rely on restaurant sales. When tourism stopped, large-scale agriculture on Oahu had to pivot with the loss of wholesale markets, according to Jensen Uyeda, Extension Agent and Western SARE state coordinator. They scaled back or found other markets. Some have cut back plantings 60 percent.

Uyeda says that Oahu’s smaller-scale farmers have capitalized on the changing markets as they can move everything they grow using the CSA system. He says, “CSA marketing has gone through the roof.” Medium size growers with warehouse space are becoming aggregators, allowing CSA boxes to be diverse. This is helping out smaller farmers, but importantly, also larger farms which didn’t have a direct to consumer system.

Uyeda predicts that larger growers will start planting more as the restaurants are starting to open up.

The grocery stores on Oahu have been trying to buy more local produce during this time, but most farmers don’t have the food safety certifications needed for a mainstream market. Uyeda sees this as a teachable moment and is working to entice farmers to get on board with food safety certification. There is a perception, he says, that it is a lot of work to comply. But it’s not and doing so would stabilize their markets.

Uyeda and ag leaders such as the Farm Bureau are in discussions on how to keep demand for CSA going, focusing mostly on quality and reliability.

The oyster industry is also heavily reliant on selling to restaurants. When restaurants shut down or reduced capacity, companies such as Hawaiian Shellfish on the Big Island took a hit in their outside sales, says Hatchery Manager Brian Koval. The company supplies premium larvae and seed to their parent company, Nisbet Oyster Company, Inc but also supplies seed and larvae to over 30 farms on the West Coast. Many farms are having difficulty selling their oysters with restaurant closures given such a high supply and low demand. Most of the oysters farmed in Hawaii and the West coast are sold at a small 1-2 year size, for the half shell market in restaurants. Most farmers did not grow large oysters (2-4 years), as often the restaurants did not take oysters when they were over a certain size. Large oysters are tougher and not desired to be eaten raw by restaurant goers. With restaurants closed, and consumers wanting to eat them at home, the market shifted to “BBQ Oysters” says Koval. This lowered the demand for seed from Hawaiian Shellfish as farmers needed to hold onto the oysters they had from last year to grow them to a larger size instead of buying new seed. With the final markets for the oysters closed or reduced, the entire supply chain grinds to a halt.

Koval is still producing larvae and seed, but he’s trying to figure out how to find markets for the single oysters that he cannot move as quickly. He isn’t sure how long the company will feel the impact. “At least until the end of the year, I’d predict. I’ve thrown this year out as a bad year, but need to make changes in our plans for the future. We plan to add additional species and explore international markets for our shellfish. It’s frustrating as we were having a good year after making some upgrades to our farm in the offseason and the pandemic changed it overnight. But we will weather this storm and come out stronger and more diversified.”

Ken Love, tropical fruit grower on the Big Island, says that farmers markets have now re-opened, but as tourists have not come back, many vendors have left and opened their own roadside markets. Their income varies depending on what’s in season.  Most of the pop-up tents are out once or twice a week with income averaging $100 per day.  Since the start of the pandemic, the community has really come to support local ag, says Love. Similarly, Francis Mendiola, Northern Mariana Islands, states that small farmers on his island who used to sell to restaurants are now selling at mobile farmers markets at reduced prices.

When tourism stopped, farmers couldn’t sell what was already in their fields. This combined with import orders made a month previous created massive surpluses. Prices dropped; for example, cucumbers that were selling for $1.30/pound quickly dropped to as low as 60 cents per pound.  Farmers started shutting down their plantings.

Barber, with members of the Guam Western SARE advisory group, worked to create two programs to assist farmers and get more local produce in consumers’ hands. The first was to initiate a re-orientation of local government procurement of agricultural products to local grown produce instead of imports, as mandated by local law but not enforced for decades. The second was to start a weekly mixed local produce curbside pickup sales operation.

With COVID-19, schools saw their federal programs serving 20,000 pickup meals per day instead of a typical 5,000 per day, with no local foods.  Demand at, and the number of, food banks was increasing as well – again with imported foods.

Barber created a proposal for the Governor to set aside $233,000 in Coronavirus Aid, Relief, and Economic Security Act (CARE) money to set up a revolving fund for the island’s farmer co-op to contract with local farmers to plant produce for institutional programs. At the same time, they would work at the cabinet level to modify procurement to prioritize purchasing local produce over imported produce for these efforts.  Key is the involvement of the Governor’s office to help work through the barriers currently in place to local produce procurement.

“This is an opportunity to re-link government institutions and local farmers,” says Barber.

The proposal was modified into a Memorandum of Understanding between the Government of Guam, the Farmer’s Cooperative Association of Guam (FCAG), and the University of Guam Cooperative Extension Program. The MOU is currently undergoing approval and signatures.  Even as the MOU is working its way through the system, these discussions led to the Department of Health and Social Services Senior Division processing a purchase order to the FCAG for 2,700 mixed produce bags at $8 each.  These are to be delivered to the island’s seniors through the congregate meal and homebound programs during the end of August and first week of September.  This single purchase of over $21,000 is just the tip of the iceberg in terms of potential local government purchases, asserts Barber.

In the second effort, Barber worked with the FCAG to create $20 bags of produce to be picked up safely curbside. “These bags are a really good deal,” according to Barber, generally representing at least a 15% saving over retail prices. Over the past 14 weeks it has purchased and sold over $30,000 of farmer member’s produce.

In all areas, demand for food assistance and school meals has heavily increased. The demand for food at the food banks is exceeding capacity.  On Oahu, the state farm bureau works with the food bank system which gets federal, state, and local funds. The food bank is buying surplus product, which is helping not just the consumers but the farmers trying to move product, says Uyeda. On Saipan, the school district had to quickly come up with a distribution plan to get more that 10,000 meals per day to their students, says  Mendiola.  “It was important nutritionally. That breakfast we provide may be first meal of the day.”

The food shortages and Shelter in Place orders have created an increased interest in gardening and preserving in order to have access to fresh local foods and not have to go to a market. Ken Love is part of a Facebook page for Master Preservers on Hawaii Island and that community has increased with more interest in gardening and preserving by locals.

In addition, Mendiola says, “Due to Shelter in Place, people are becoming self-sufficient gardeners. Our school garden had okra, eggplant, cucumber, and pepper seedlings just staring to sprout. We distributed to the students and they planted them at home. Farmers are teaching these gardeners through a Facebook Group.”  A couple of villages are doing community gardens with social distancing.

“I hope people continue with gardening even when get things get back to normal,” Mendiola says.  “They seem so happy with their work and fresh produce in their house.”