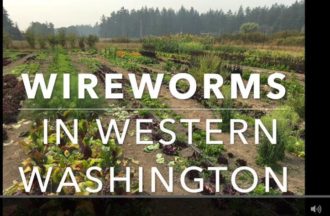 Christine Langley has successfully run Lopez Harvest organic farm on Lopez Island in Washington state’s famed San Juan Islands for more than two decades. But for most of that, she wasn’t fighting wireworms.

Those showed up about a dozen years ago, and have made her job a lot harder.

“I grow a lot of lettuce for the restaurants and grocery stores here, and when wireworms showed up I starting having problems,” she said. “I would plant 100 feet of lettuce and maybe 40 percent of them would die – and that’s not really acceptable when you’re trying to make a living.”

For years, Langley has been working around the wireworms – the larval form of click beetles that spend several years in the soil before emerging as adults.

“I noticed that it was worse in certain places in the field, so I’d plant things other than lettuce and potatoes in those areas,” she said. “I also found it was more problematic for me in late summer, so I would make sure that my least wireworm-infested rows were available then.”

To give herself more options and space, Langley recently opened up a new field, converting a section of pasture to be able to plant more row crops.

“I thought I was solving the problem by opening some new ground,” she explained.

But wireworms love pasture, and Langley’s new field was even more infested.

“Wireworms prefer sod and certain grain crops,” explained Brook Brouwer, the director of Washington State University Extension in San Juan County, which encompasses all the islands. “As vegetable and market farmers move into those pastures, they’re tilling up that ground and you can have a really robust population of wireworms living in that soil. They’re hungry, and if you plant a crop it can be wiped out.”

So with a three-year grant from Western SARE, Brouwer is looking for ways vegetable growers can mitigate wireworm problems. He’s testing planting a trap crop of wheat, both with and without the organic pesticide bait Spinosad.

“There’s really nothing that will kill wireworms, so our approach is looking at damage mitigation,” Brouwer said. “If we can find a way to reduce the immediate damage they do, especially in new fields, in the long term we can begin to reduce their population.”

The wireworms on the San Juan Islands are two different introduced species, and another part of the project is setting pheromone traps to see where these species have spread in Western Washington.

Langley has been growing and plowing under mustard crops as one way to reduce the wireworms in her fields, and is curiously watching the trap-crop trials Brouwer has in her new field. In those, a strip of wheat is intercropped between rows of lettuce transplants, giving the wireworms a more-familiar food source.

“If it works, I’d do it for sure,” she said of the wheat. “One of the side benefits to me with both the mustard production and the wheat would be that it’s good organic matter for the soil. I’m an organic farmer and we’re all about organic matter, but I also realize organic matter is what the wireworms are attracted to.”

Some of the strategies to control the pests are intensive cultivation and bare-ground fallowing – cultural practices Langley is loath to do.

“Those things are so counterintuitive to me as an organic farmer that I’m hoping that’s not the solution,” she said. “I’m hoping there are other ways to approach this problem, and we’ll keep coming at it from as many angles as we can.”

And maybe the bait and trap cropping will work. The first-year data is being collected now and Brouwer and Langley are both interested in seeing the results.

“I have other disease problems and insects, but they crop up here and there and you can control them,” Langley said. “Wireworms affect everything. When I talk to my farmer friends, it’s the first thing we talk about. ‘How are your wireworms? Oh, ours are fine.’ But I’m not fine with them being fine.”