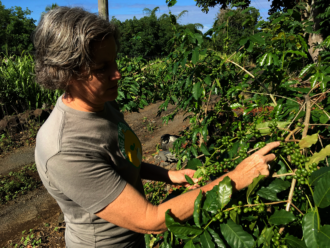 When the coffee berry borer arrived in Hawaii 2010, Suzanne Shriner had a hard conversation with her parents.

“I sat down with them at the kitchen table and told them we might have to get out of the coffee business,” she remembered. “It was a pretty sober moment, and it wouldn’t have been a good time to sell.”

Shriner owns Lions Gate Farms, a successful estate coffee operation on the Kona Coast of Hawaii’s Big Island and her parents also operate a small coffee and macadamia nut farm nearby. Their farms– and the rest of Hawaii’s profitable coffee industry – were under threat from the coffee berry borer, a small (and aptly named) insect that bores into ripening coffee berries.

“In those first years, I had friends stump their fields rather than harvest,” Shriner said. “This insect really took a toll on small farmers and farmers who had second jobs.”

What saved Shriner’s five-acre farm and the islands’ industry was an integrated pest management program for coffee berry borer developed by growers like Shriner and University of Hawaii and U.S. Department of Agriculture researchers. Western SARE funded some of the initial research into biopesticides for coffee berry borer management, as well as more-recent research.

The IPM program for coffee isn’t easy and it hasn’t eliminated the coffee berry borer from the islands. What it has done is given growers a way to limit the damage done by the pest to economically manageable levels.

“The IPM program for coffee berry borer is true integrated pest management,” said University of Hawaii researcher Alyssa Cho. “It has a number of steps and you have to do them all for it to be effective. It’s complicated and being in the tropics complicates things.”

But it is working, and there are a number of researchers looking into ways to make it work better.

The coffee berry borer is a pest in all the major coffee-growing regions of the world except Nepal. Female beetles bore into the base of the coffee berry (or cherry, as they are more commonly called) and lays eggs inside galleries she bores in the coffee seed, which when roasted is called a coffee bean.

“The galleries have a discoloration that gives roasted coffee a dirty flavor,” Shriner explained. “The feeding also forms sharp edges on the bean, which scorch during roasting and also impact flavor.”

That’s direct damage to the end product, and heavy infestations can result in beans being downgraded or rejected outright. It’s quite a difference to what Hawaii’s coffee growers used to experience.

“Coffee was easy before the coffee berry borer,” Shriner said. “Most growers had second jobs because for coffee all you had to do was plant, fertilize and pick. The university didn’t have a coffee extension agent.”

Now growers have to spray in the spring when female beetles emerge from the berries to colonize new fruit. The insects breed inside the cherries, so the emerging females are already impregnated and ready to lay eggs. Once they burrow into a new cherry, sprays don’t reach them.

“Because of that, spraying is only effective for a short window of time,” Shriner explained. “Mostly in March and April, when you can catch them sitting on the end of the bean.”

The biggest weapon against the borer is sanitation – strip-picking coffee fields bare at the end of the season. It’s expensive and annoying and effective.

“The fruit that doesn’t get harvested we call raisins and there can be 70 to 120 coffee berry borers in each raisin,” Shriner said. “After harvest is over, we send the pickers through the fields one final time to strip the trees of any raisins left. It keeps the pest presence low.”

That strip-picking costs about $500 an acre and eliminates one reservoir of the pests. The other big source is berries that have fallen to the ground. Sweeping those up would further reduce future generations but is all but impossible to do on many farms built on Hawaii’s rocky and rugged volcanic hillsides.

A recent research project funded by Western SARE showed that applying certain mulches at the base of coffee plant increased the numbers of a type of nematode that feeds on the borer larva in fallen cherries.

Potential Predators of the Pest

Parasitic wasps are present in other coffee-growing regions, but introducing non-native species is always delicate and especially so on an island, so Honsberger and other researchers are looking at how specific the parasitic wasps are in selecting hosts.

A possible side benefit to one species he’s studying is that it also seems to feed on another type of boring beetle that may be spreading the fungus responsible for rapid ohia death, a disease killing the most common native tree in Hawaii’s forests.

Exclusion, another IPM tactic, is also being practiced to keep the berry borer from the Hawaiian island of Kauai, which has 3,000 acres of coffee under cultivation. The main grower there recently moved its visitors’ center away from the coffee fields to better prevent accidental introductions of the pest.

“What we’re doing now is keeping the damage level to about 5%, which for the rest of the world would be barely acceptable,” Shriner said. “Here that’s what we’re shooting for.”