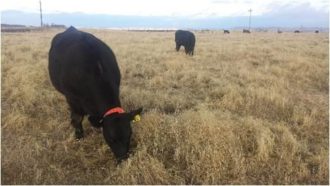 That one thought is why Kip Panter, Research Animal Scientist at the USDA-ARS in Utah, is passionate about the collaborative work he, other Utah-based researchers, extension professionals, and ranchers have led to restore degraded grasslands. The inspired project team, studying at three ranches, found a “really good economical way to reduce medusahead and prepare the land for restoration.” This tool and other outcomes from their project led to the establishment of a larger scale project that will create an innovative grazing strategy to increase rangeland health and reduce the likelihood of crooked calf syndrome from over-ingestion of lupine.

The tool:   using targeted grazing to clear the land of medusahead. The targeted grazing provides a sustainable seed bed preparation that requires only minimal disturbance to allow the planting of improved grasses and forbs. Using this method, the rancher can fully utilize the rangeland the year of the seeding and, following one year of rest for seedling establishment, then utilize the newly seeded pasture the fall of the second year.

Livestock producers in the Channel Scablands of eastern Washington confront degraded grazing lands from previous overgrazing, worsened by frequent wildfires and subsequent invasion of annual grasses and undesirable forbs.  Medusahead and cheatgrass have pushed out native grasses. Without the native plants, cattle turn to eating lupine which in turn causes crooked calf syndrome (CCS). In one county alone, 4,000 calves were affected with CCS in 1997, and many had to be destroyed, with some ranchers losing as much as 100% of their calf crop. One rancher has data that showed his stocking rate throughout his ranch had dropped by more than 50% since 1990, which he attributes totally to the invasion of medusahead.

Two possible solutions are training cattle to eat medusahead and to fully restore the degraded lands allowing for the establishment of plant species with better nutrition.

Ranchers and researchers at ARS and Utah State University partnered in looking at ways to beat back the invasive species and grow new forage. Range technician Clint Stonecipher states that it is not enough to get rid of medusahead and other invasives; we need to look at full restoration. “There is not one silver bullet. There will be different tools used. Natural systems are complex.”

In the first project, Rangeland Restoration on the Channel Scablands of Eastern Washington, two grasses along with forage kochia varieties were identified as ones that can be established on the harsh rangeland.  Establishment of improved grasses mixed with forage kochia appears to reduce medusahead reinvasion over the short-term. As cattle eat more forage kochia, there is a reduction in crooked calf syndrome.

The outcomes from the research conducted on this small acreage Professional + Producer project were promising enough to lead to the larger scale Research and Education project Training Cattle to Graze Medusahead and Avoid Velvet Lupine: A New Tool to Sustain the Economic Viability of Livestock Operations in the Western U.S. The enthusiastic response from stakeholders who were very receptive to the original work also led to an increase in acreage being used for research and demonstration.

Juan Villalba, Associate Professor at Utah State University, and his team are now investigating whether the nutritional context created by establishing the identified grasses and forage kochia provides the appropriate nutritional context to enhance use of medusahead and reduce use of lupine by cows and their calves, and by calves later in life. The outcomes will provide ranchers with low-cost and environmentally sound tools to enhance ecosystem services, including biodiversity and improved animal nutrition, welfare, and health. Ranchers have selected areas for experiments and demonstration sites on their ranches, provide feedback on the results, and integrate results obtained with their “real life” experiences.

In its first year, the project is generating interest.  Villalba states, “Producers in the team are already applying the approach at larger scales in their operations.”