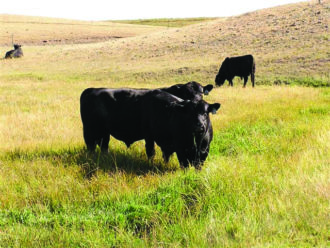 “I love going out to the field, pulling up grass and roots, chewing on the grass and roots,,” said Dr. Fransen, who is stationed at WSU’s Irrigated Agriculture Research and Extension Center at Prosser. “I want others to understand the importance of forages. I want to change the ‘it’s just grass, it will come back’ mentality.”

To increase understanding, Fransen and a broad team of ag professionals, researchers, and producers created a Westside (Oregon and Washington) Pasture Calendar and are busy developing a Northwest Inland Pasture Calendar.

“The Calendar is focused on the long-term sustainability gained by enhancing the original resources on marginal lands through improved soil health, cleaner water and air, all while producing food,” said Fransen. “We hope to reduce overgrazing issues through education about the growth cycle of forage grasses that will result in returns to the producer and communities for decades.”

The project team uses the USDA-NRCS, Major Land Resource Area Inland Region of the Pacific Northwest climatic zone to describe perennial pasture plant growth and how management actions can affect that growth – both positively and negatively. The Calendars aim for the optimal management of forages by season.

Over 250 people participated in eight, face-to-face workshops based on the Westside Calendar. They reported gaining new knowledge and skills, and the team hoped to replicate this success with the Northwest Inland Calendar and new workshops. As workshops were being planned, the COVID-19 pandemic hit and the team had to change their planned delivery programs from nine day-long, face-to-face workshops to four half- day webinars. This has presented both opportunities and challenges.

According to Fransen, the underlying Calendar philosophy is overgrazing dryland and irrigated pastures does more harm than good to the environment, and increases challenges managing water and grazing animals. Economic losses also occur with overgrazing, due to lost forage, increased weed control costs, and especially need to purchase off-farm supplements or other feedstuffs.

After creating the Westside Calendar, the team decided to add even more supporting materials in the Inland Pasture Calendar. The Calendars are both about 30 pages long, but the team wanted producers and those in farm planning and Extension who are providing recommendations to understand the background research that goes into the Calendar, thus the Inland Calendar is about three times the length of the Westside Calendar.

“Given upcoming retirements of current forage scientists and a lack of new scientists to backfill the positions, I want the Calendars to be robust and dynamic,” states Fransen.

During development of the Northwest Inland Calendar, team members at times disagreed tremendously and worked hard to arrive at the best results.  One member was challenged to prove that an idea was incorrect, as he believed. To do so, he divided a herd in two, and then looked at forage production and quality. One section was set aside and rested in September and October (as the Calendar recommends), while the other was continuously grazed fall and winter. With spring greenup, the fall rested pasture initiated growth more than four to six weeks ahead of the overgrazed, fall and winter grazed pastures. That was the turning point for everyone.

Fransen notes, “It was good that producer proved it for himself, and this is what makes the Calendars work so well. “

After changing the Northwest Inland Calendar workshops to half-day webinars, about 150 participants signed up. However, the webinars averaged about 40 per day. Fransen did hear from registrants that they were choosing to watch the recorded webinars at a later date, so he hopes to still reach the team’s goals of reaching producers and ag professionals. Those who participated have provided positive feedback.

Holding webinars and having a back-up recording has the benefits of potentially longer lasting educational opportunities and impact.

Fransen says, “I wish that we had had the same chance with the Westside Calendar because three team members have already retired, I’m going to retire this year, and one more likely is retiring next year. We’ll all be gone, but what we did will last for decades and beyond.”

The team found challenges in replicating the robust interaction of F2F trainings, especially in the Q&A section, in the on-line format.

All webinars are recorded and every presentation will be packaged independently, with public access.

“We now will have a permanent record of what was taught and discussed at that time, to complement the publishing of the Calendar,” says Fransen.

Fransen has been told by colleagues nationally and internationally these Calendars will be the new standard.

“We sent something in motion, and that’s why I want it to be the best it can to be.”

The teams see that both projects should be updated regularly, because with new discoveries in soils, crops, pastures, irrigation, fertility, grazing, grazers, and many other aspects of pasture, they can easily be incorporated into both Calendars.