Many Alaska communities have stated an interest in food production but perceive that a lack of adequate soils inhibits gardening. Most Alaskan producers confront related soil problems, such as thin root zones, nutrient-poor soils with low organic material contents, and some issues with permafrost. Despite the high cost of shipping, some producers actually import all of their garden soils from the continental United States on a barge, unaware that many of the necessary soil components can be found locally. This video demonstrates soil building and raised bed construction. 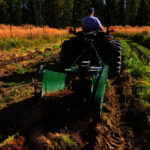 The Kenai Peninsula is the fastest-growing agricultural region in Alaska, with the number of farms increasing at nearly three times the rate of the rest of the state.  But most of those farms are small – less than five acres – and selling direct to consumers at farmers markets or to local restaurants.  The Kenai […]

Responses to COVID-19 in Western Ag

Agriculture in the Western Region has been greatly impacted by COVID-19 and its resulting Shelter in Place orders, labor and processing challenges, and strongly shifting consumer behaviors and markets. It has also become clear that our agricultural community has been responding quickly and creatively. Western SARE cares about our community and feels a responsibility to share ideas and strategies. Toward that end, we conducted a survey of our state coordinators and project leaders of grants funded in the past three years. The data and examples are listed below. We will also create a report from this information, along with ideas provided on how Western SARE itself should adapt to the crisis.