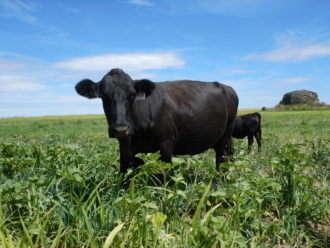 Farmers know that planting one crop year after year is asking for trouble. It depletes the soil and leads to increased insect, weed and disease pressures. But in certain places, it’s also been the major agricultural system for decades.

In north-central Washington, along the Canadian border, dryland wheat production has been the dominate production system for a century using a wheat-fallow rotation.

“Some producers started using direct-seed tillage systems to improve their soil health, but that often meant increased pesticide and herbicide use,” explained Leslie Michel, a soil scientist with the Washington Department of Agriculture. “We wanted to experiment with a more biologically intensive and sustainable management system, integrating cover crops and livestock to improve soil health, suppress weeds and reduce pesticide use.”

Michel started the research in 2014, when she was with Okanogan Conservation District, seeing if cover crops could be integrated into the wheat-fallow system.

“We’re really moisture-limited here,” she explained. “The biggest challenge in fitting a cover crop into the rotation is the availability of water.”

When one of the cooperating growers told Michel he wanted to run cows on the cover crop, her first thought was “don’t ruin my study.” Her second thought was “that’s a good idea to study.”

She applied for and received a Professional + Producer grant from Western SARE and worked with five producers to integrated cover crops and cattle onto their fields before their wheat or other grain cash crops were grown.

“The livestock portion was really key for our producers,” she said. “Just having the extra biomass from the cover crop and being able to use it in different ways.”

The results were encouraging but mixed. Most soil health parameters didn’t change significantly, and soil moisture was significantly lower in the grazed cover-cropped areas than the control plots. Despite that, plant-stand establishment and plant height in the following cash crop was the same, yields were similar.

“Although the cover crops used some soil water, a lack of significant difference in the subsequent crop yield suggests that plant-available water was similar,” Michel said. “This may be due to increased water recharge during the winter in the cover-cropped plots with more plant roots and avenues for water to infiltrate the soil.”

The cows and calves grazed on the cover-cropped plots did well (even if weighing them was more of a challenge than the researchers anticipated.) Since the trials, farmers continue to experiment with cover crops and grazing with mixed success.

Intercropping a grazing mix with a cash crop is increasingly being used. Producers graze the cover crop mix to use as feed for cattle in the winter, and the cash crop can be harvested without the need to replant. Producers found that corn vectored wheat streak mosaic virus into the cash crop, which decreased cash crop yields. While the triticale yields were down, the grazing benefit was significant enough that the grower planned to use the method again, next time without corn.

Michel knows that in the arid conditions, incremental benefits over time are the best anyone can hope for.

“Cover cropping is not a standard practice in dryland farming,” she said. “It’s becoming more common, especially with people doing direct-seeding, but there’s still a lot of missing information. We don’t know, for instance, how long to leave a cover crop out there to manage moisture levels and yield. There’s also not enough information on grazing’s impacts.”

And for those reasons, the research will continue.