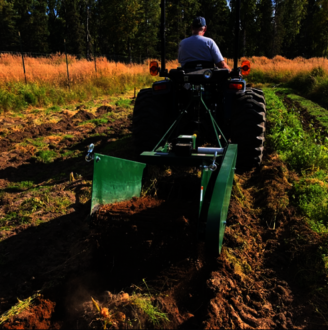 The Kenai Peninsula is the fastest-growing agricultural region in Alaska, with the number of farms increasing at nearly three times the rate of the rest of the state.

But most of those farms are small – less than five acres – and selling direct to consumers at farmers markets or to local restaurants.

The Kenai Soil and Water Conservation District  commissioned a study, completed in early 2017, that found for growers there to expand their distribution, they need to increase their production and look at coordinating marketing and distribution.

“Potatoes grow well here,” explained Heidi Chay, the conservation district manager based in Soldotna. “And the study suggested there could be a market.”

The problem for small growers, however, isn’t how well potatoes grow. It’s how much work they are to harvest when you’re digging them up by hand with a pitchfork.

“I had one grower tell me after last year he’d never dig potatoes by hand again,” Chay said. “He spent something like 64-man hours digging a half-acre of potatoes.”

So, as a first step to expanding production and exploring cooperative marketing and distribution on the Kenai, Chay applied for and received a Western SARE Professional + Producer grant and bought a single-row potato digger and tub washer, which the conservation district now rents out at a very reasonable rate.

“For this first year, the rate is $25 a day, and 25 pounds of potatoes donated to the Kenai Peninsula Food Bank,” Chay said.

It’s already paying off for the Alaskan farmers, where labor is always in short supply. Chay said one grower reduced his harvest and processing time from seven days to less than two. She also said that there are enough microclimates on the peninsula and flexibility in digging potatoes, that there is a four- to six-week window for harvest that will allow the region’s growers to share the single machine.

Because Chay didn’t know if she would get the SARE grant and growers didn’t know if there would be a digger available this fall, no one expanded production this season. But that may change.

“We’re going to use the winter months to get the potato growers together to talk,” she said. “There’s a lot of potential benefit if we can come up with an action plan to do joint marketing and pool product together, but that means people are going to have to agree on standard varieties and quality standards if they want to sell to a larger market.”

And while setting up that kind of marketing cooperative is never easy, it’s a heck of a lot easier than digging potatoes by hand.